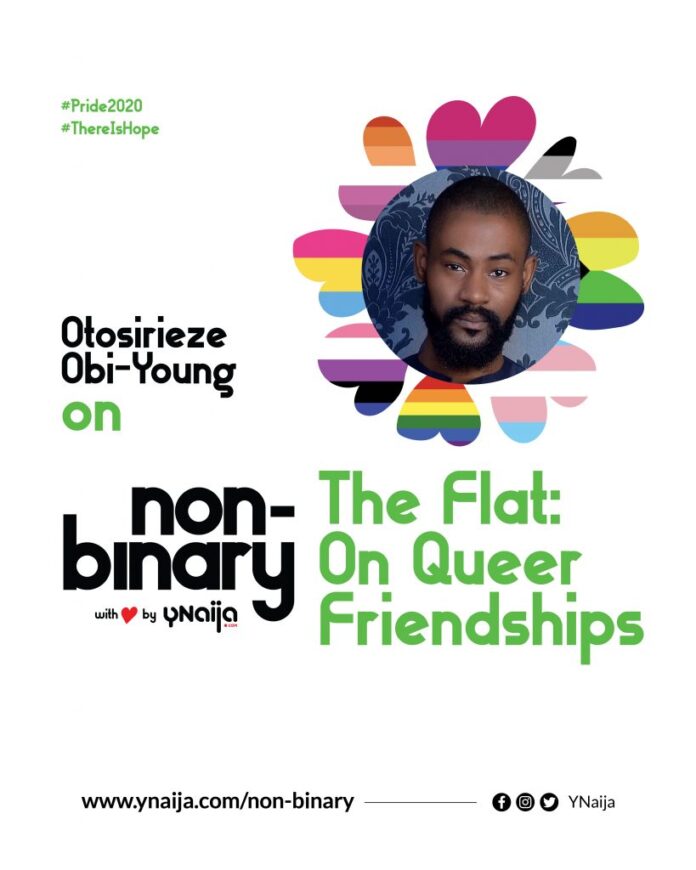 J was my classmate, but it was in The Writers’ Community (TWC), where we met A., that we became friends, talking about literature and culture and life, and how we were going to bulldoze through hurdles, because success, for us, was non-negotiable. J. and I had grown up in Aba, and A. in Kano; we knew life in the raw. A. was a sublime prodigy of a writer, whom we knew would go on to smash major. J. was talented across genres, the only one among us who wrote drama and was taking an interest in visual art.

H and E. are journalists, E. being a notable OAP. Excellent organizers, both: our gathering forces. They were also the ones who had flair, a style of character, who said, in many disguised ways: “You’re not going out with us dressed like that.”

2. Hill-Top, the student community bordering the university in Nsukka, was where it used to be, the one-room where we used to meet, before J., who owned it, moved, with H., to a three-bedroom apartment somewhere in Town. J. is gay. H. is a thoroughgoing gay. I’d always known about them, that they were close, that they were not dating: they were like brothers.

That was June 2016, two years after we’d graduated, two months after we’d finished our National Youth Service, a little under a year since J. had harangued me with questions of my sexuality over WhatsApp.

At first, I thought it was deliberate, that they were consciously building a space for people in the Community. But it was something much simpler, simple but unusual enough to be radical: blinding kindness and generosity.

We, some of the rest of us for whom it became a second home, began to call it The Flat: the new apartment where were now gathering to talk, eat, drink, shout, sleep, and bring different lenses to the world.

It was a big beating-heart group brought together, directly or indirectly, by J., whom we often teased about his remarkable network of exes, flings, and flames. We all were, with our varying backgrounds and experiences, similar in our chase of the intellectual, but different in our embrace of the social. We were of varying sexualities, too, so much so that I went from not knowing a single bisexual person to knowing several and dating one, Jo.; so much so that our heterosexual friends, B., JK, and Ez., had become a part of the Fla-mily, so much so that I looked forward to seeing their girlfriends, Ol. and I., sweet souls.

3. Our first celebration was L.’s birthday, a quiet December evening in 2016 when we invited him to E.’s house and surprised him. Our second was A.’s birthday and convocation, a scattered January night in which we played games and I drank alcohol for the first time, a small sip, and rotated drunk. There was my birthday, when we went out to a hotel and ate fish and rice, and H.’s birthday days later, when we bought cake and cooked at home, and E.’s birthday, when we went to Enugu for a getaway weekend. And they were common, the getaways. Occasionally, depending on our moods, we threw small in-house parties, with food, drinks, and games.

We were together when R. won a poetry prize, was hounded online and assaulted in person. We were together when C. was kidnapped, our mornings drained by terror and our nights full of tension. And we pushed back, as hard as we could. In those days, The Flat drowned in phone calls.

The conversations were some of the most beautiful in my life so far, full of lofty wisdom and basic love, energizing encouragement and enervating arguments, and, of course, dashing sarcasm and hilarious shade. We talked about everything happening in the world, the theories and the practices, the art and science of it all. It was with these people that I learned some of the most important character-building lessons that we don’t find in books.

When I came to The Flat one evening and said I was dropping my master’s studies, H. and J. pressed on until I decided to continue, and months later when I told them I was resigning from my lecturing job, everyone said no. Two years later, after I went ahead and resigned, J. would drop his own master’s and decide to drop his lecturing job.

4. It was delusional to imagine that things would remain the same. In late 2018, A. moved to America. In early 2019, H. moved to Abuja. J., whose career in visual art was about taking off, was talking about Lagos, and soon would move. And I, quintessential Eastern Boy, had also begun to look longingly at Lagos, drawing closer. When J. moves, The Flat will cease to exist as a physical space.

A few times, we talked about a grand reunion, far away in the Bahamas, where E. wanted to own a house, or in a fancy penthouse on The Island, which was J.’s target, or, even better, on my helicopter. Our dreams would be closer by then. We would have been closer, too, in our pursuits of happiness, our journeys to fulfilment.

Otosirieze Obi-Young is a writer, journalist, curator, and Editor of Folio Nigeria, a CNN-powered multimedia storytelling platform. His short stories have appeared in The Threepenny Review and Transition. He has sat on the judging panels of The Gerald Kraak Prize, Africa’s only award for art exploring sexuality, gender, and social justice, and of The Morland Writing Scholarship. His work in queer equality advocacy has been profiled in Literary Hub. In 2019, he received the inaugural The Future Awards Africa Prize for Literature.

Find him online at @otosirieze or on otosirieze.com