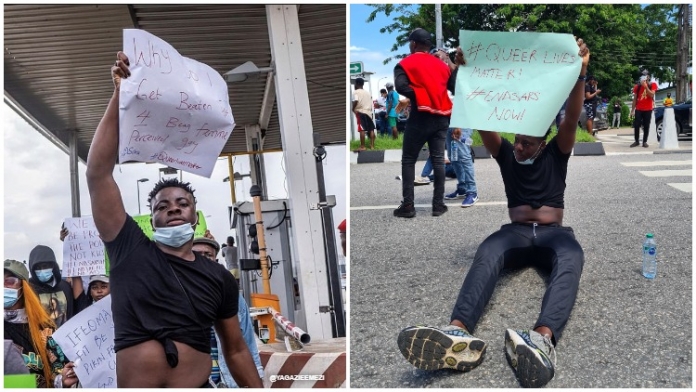 In the midst of ‘chaos’, history can be made. This was proven by the brave, young Nigerian, Mathew Blaise who has played an active part in the #EndSARS/#EndSWAT protest.

Unlike other protesters who mainly speak out to call for an end to police brutality, Mathew specifically speaks out on the injustice meted on queer Nigerians who not only deal with the now-defunct SARS but the Nigerian police in general. Ordinarily, it would seem unnecessary to speak specifically on queer issues at the protest because an end to police brutality means all will be well with everyone but that is far from the truth.

It will surprise you to know that a good number of the protesters would actually support police brutality against queer people because they believe being queer is against the ‘Nigerian culture’. This was proven when queer protesters were attacked by their supposedly straight ‘peaceful’ protesters in Abuja on Wednesday.

That is why Mathew’s stance and the video documenting his brave move is quite important. This shows the amount of work queer people have to put into getting the freedom they deserve. It also shows that more queer people need to speak up about their plight alongside the current #EndSWAT movement because straight people are not going to make that move.

Some Nigerians, however, have expressed an odd view as to the stance of queer people at the #EndSWAT protests. A lot of them are of the opinion that there is nothing wrong with fighting for queer rights but that it should be done separately as it takes away from the fight of the moment. One of these is the twitter use @Sugarbelly who wrote;

“Nigerians are homophobic and rights for LGBQ people are trash in Nigeria, and we will table that one in its own time, but please, it is wrong for LGBQ people or LGBQ groups to hijack the #EndSARS protest for their own cause.

Bringing your own flags etc divides the campaign focus.”

It should be noted, however, that queer people who have protested so far have not been protesting for Same-Sex Marriage (Prohibition) Act 2013 law or rights to get married, they have simply just been marching for the police brutality on queer people to stop. A form of brutality that is endorsed by a lot of homophobic Nigerians. So how did they hijack the protests?

In response to Sugarbelly another twitter user @siije_ thankfully explained in clear terms why the time was right for queer Nigerians to protest the brutality they experience form the police. She wrote in her response;

“I personally think there’s no better time than now for them to protest.

Because not only are they disproportionately affected by SARS brutality, protesting for their rights in the midst of others is a lot ‘safer’ for them than an exclusive Queer rights protest”

Any smart Nigerian will know that queer people at the #EndSWAT protests are simply fighting for the same basic rights everyone is asking for. The right to be treated like a human being.