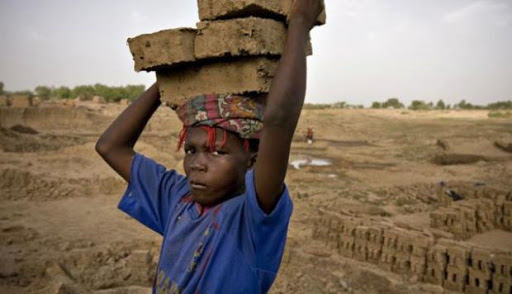 August 23 is the international day of remembrance of the slave trade and its abolition. But even as we celebrate the official emancipation of our ancestors from the transatlantic slave route, we continue to shed the light on modern forms of slavery that still thrive in Nigeria today.

Despite the efforts of human rights activists and the criminalisation of human trafficking, Nigeria continues to hold a reputation for having the continent’s largest population of people living in modern slavery.

Apart from being a country of origin, transit and destination for human trafficking victims, local forms of modern slavery exist. Parents, often in the rural areas, send their young children to ‘uncles’ and ‘aunts’ in the city, under the pretense of ‘furthering their education’. These children are then exploited, forced to do overwhelming domestic work and to look after children not much younger than them. In most cases, they are subject to harsh treatments from their employers and receive little or no pay. Other children are forced into mining, stone quarrying, agricultural work and so on. Some are even enlisted into military groups.

Modern slavery also includes forced marriages, still prevalent in the north. Girls as young as 13 are married off, usually against their will, and to much older men. They are also forced to take on roles that neither their bodies nor their minds are prepared for.

Poverty, unemployment and economic issues are likely the main driving force behind the prosperity of such practices in Nigeria. A poor father or mother may feel that their only choice is to ‘lend’ out their children to rich men and women for payment or to sell their daughter into thinly veiled sex work. These desperate parents may even convince themselves that it is what is best for their children.

But understanding the reasons behind it does not make it acceptable.

A woman should not need to fear being sold into prostitution just because she comes from a poor home. She should also not be forced into marriage before she is ready. Young children, should not bear the responsibility for providing for their family, no matter the situation.

Maybe we forget that these people are human too and not just a means to an end.

Maybe we forget that they have the same rights as everyone else. And that these rights should be respected.

On August 23, 2020, the National Human Rights Commission (NHRC), called for an end to all forms of modern slavery.

Hopefully, their efforts will usher in a future where basic human rights can be enjoyed by all, rich, poor, urban, rural, adult and children.

Art stands a viable mental health cure but why do we still ignore this?