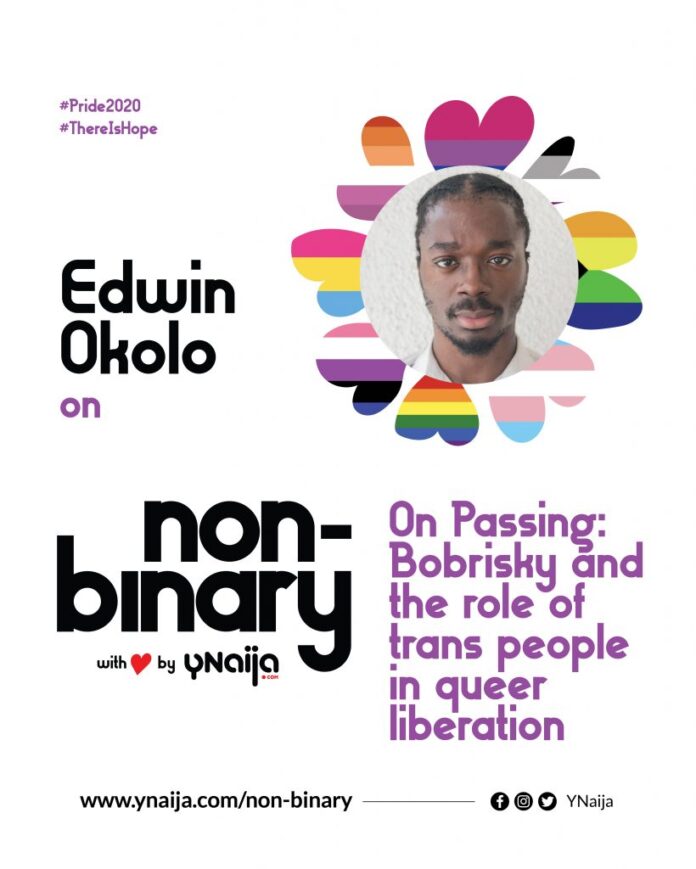 In January 2017, I began to run the Sexuality Blog on YNaija. The premise was simple: YNaija was pivoting towards a vertical model that created content silos based on the major topics that young people seemed concerned with at the time. Gender and Sexuality was a topic gaining momentum in Nigeria at the time, mostly because of Idris ‘Bobrisky’ Okuneye; a trans woman who was only beginning to explore gender expression as a way to validate her reality. I took the role, in part because it provided an extra source of income, and was given free rein to shape the blog in whatever direction I chose, provided I stuck to the basic tenets of gender and identity.

What I couldn’t have anticipated was that the YNaija Sexuality Blog would radicalize me to the fight for the rights of LGBT persons. It was a relatively rare opportunity for Nigerian journalists; one where I was paid to investigate the intersections of gender, sexuality and identity.

Nigerian media publications are mortified by the idea of nuanced explorations of gender, identity and sexuality. This is why, when any conversations on these matters are had, the Nigerian media works to flatten the narrative and sensationalize the principal characters, twisting whatever remains into a hook with which to lure bigoted Nigerians, who are simultaneously revolted by and obsessed with anything they consider perverse. Linda Ikeji, for instance, built her massive, million-dollar empire on the backs of queer and trans Nigerians, scouring the internet for any slivers of their lives and amplifying it to her ‘comment section’, a singular forum for trolls that summarily dissected and devoured whatever Linda placed in front of them. She also singled out a number of queer people, most prominently Onyx Godwin, as a buffer against any kind of criticism aimed at her ethics or her motivations for exposing LGBT people to needless scrutiny.

Eventually, Linda would become a victim of her own mob. And in some perverse but deeply satisfying karmic resolution, Bobrisky, her most frequent target, would leverage the visibility Linda had given her, to publicly document her transition, monetize her flaws and build for herself the biggest prohibitive tool against bigots any queer person in Nigeria must acquire: a fat bank account.

I built the Sexuality Blog in the year Linda’s campaign against queerness—and the surge of copycat blogs seeking to siphon some of her monetizable audience—gained mainstream attention. Their popularity solidified my desire not to micro-focus on the individual lives of visible queer Nigerians/Africans, but instead to expand my focus and look at the systematic problems the community faces, and the history that led it to its present iteration. What I found surprised me. The people at the forefront of most battles about gender, identity, sexuality, feminism, ableism and mental health, theorizing and documenting the progress, were women. Not just any women, but trans women, queer women, and non-binary persons.

I read about Marsha P. Johnson, credited for starting the Stonewall riots, which began the fight for LGBT rights in America, a fight that has rippled out into a continuous global protest, gaining ground each day. I read that Marsha was only a descendant of several generation of black trans and queer women who chose to live visibly, even when it was dangerous to. I found that today, pacified by the rights won and the manufactured visibility of social media, many LGBT persons have become complacent, and balk when trans people try to expand the limits of possibility for rights and freedoms for LGBT persons.

This idea of trans people as front-runners for lasting change is true, even here in Nigeria. In spite of her revolting politics and her peculiar tastes, Bobrisky has in 5 short years, rattled the cages of the Nigerian intelligentsia, agitated politicians and government officials, and made church leaders foam at the mouth, simply by being her most authentic, curated self. Freed of the burden of being a vocal advocate for LGBT rights, Bobrisky has offered a flawed but deeply satisfying narrative of what it is like to come into your own as a queer person, embracing your true gender identity, and finding the language to express that identity to millions of followers. She has taught, in her own way, the importance of respecting chosen pronouns and ignoring a dead name. And people have learned, even if they only do it to mock her, they have learned to address her as she prefers.

For many years, Bobrisky lived as an “egg,” a term used in queer circles to describe a person who knows they are trans, but have not begun the process of publicly aligning their gender expression with their true gender. She eased into her true self, first expressing her identity through androgyny, allowing herself to be misgendered as male and inaccurately assigned as homosexual. Although she was open about her attraction to men, she played along when people asked her if she had a girlfriend. But, as future Instagram live sessions would reveal, Bobrisky had always known she was trans, and had come out to her mother about her true gender identity long before she began to tease this identity to the world. Today, Okuneye is finally out of the egg-phase, and is living publicly as a trans woman.

Bobrisky’s bravery has also given countless trans women and non-binary persons the permission to express their true gender identities through makeup and dress. Jay Boogie, Buchi Cutie, Missacapel, Naijablackbarbie, and James Brown  are only a handful of the dozens of trans women and drag queens who, emboldened by Bobrisky’s visibility and success, have carved out their own corners of the internet by projecting virtual personalities. It is they—and not the alleged queer politicians and CEOs, not the highly influential rumoured-as-queer film and music popstars—who are expanding the conversation around the LGBT movement in Nigeria by offering much needed visibility, and challenging their audiences and detractors in ways that force important conversations.

It is easy to mistake the bravery shown by these women as commonplace. The reality couldn’t be further from the truth. I have studied at length, the life of American Olympian and trans woman, Caitlyn Jenner. White, rich, and privileged her entire life, it still took Caitlyn Jenner upwards of 60 years, to publicly acknowledge her trans identity and begin to take the steps necessary for her to live as her true gender. She did it quietly, sequestering herself from the public while she aligned her gender expression to her gender identity. Many have argued that she did it this way because she didn’t want to ruin her family’s brand, but there are other explanations that are just as compelling. As someone who had always known she was trans, but had lived as an egg for 60 years, being married and raising children in a body that didn’t feel like her own, she felt the only way she could come to terms with her identity was to remove any tethers to her old life. With reconstructive surgery that included top surgery, there was no more throwing a shirt and jeans on, and walking a mile in her old life. The past was gone, all that was left was forward propulsion.

Once a trans person leaves the egg state, there are significant changes in pressures that they face. They are now judged with the secondary criteria of ‘passing’. Passing, as a queer term, refers to the ability of people in the trans and non-binary communities to closely align their gender presentation with their true identity, such that they are able to convince people they encounter of their authenticity. Passing is paramount, especially in a place like Nigeria where swift and violent retribution follows.

But the reality is, not every trans person will pass, no matter what they do. For some, the transition from egg state happens too late, after biology has modified their bodies in ways that even surgical affirmation cannot realign. For others, the familiarity of living as one gender becomes so ingrained that they are unable to fully shed this identity and embrace their true identity.  As such, every trans person is forced to make a number of important, deeply personal decisions.

Are they content to merely acknowledge their trans identities to their communities? How much modification are they willing to undergo to align their gender expressions to their true gender identities? Are they willing to undergo sex affirmation procedures, even though those which require lifelong monitoring from a health professional? It seems almost farcical, in light of these questions, to assume anyone would choose to be trans in order to prove a point, or to gain favour from certain groups.

My time as editor of the Sexuality Blog was an education in the politics of the LGBT movement: the place of queer and trans women in its evolution; the discrimination that has denied them the benefits of the freedoms they fought for; and how systemic exclusion might motivate a person to remain an egg, even when it brings extreme unhappiness to themselves and to the people around them.

Bobrisky, and the dozens of trans people who dominate our newsfeeds, might not be the saviour we thought we needed to start important conversations about the disadvantages and oppression against the LGBT community. But, by Jove, they are getting results the rest of the community has as yet been unable to manage. There is a lesson there for everyone who advocates for human rights. Bigotry is a shortsightedness that eventually affects us all, not just trans women.

Elisha Abbo’s victim finds justice in court, women are most certainly not marching against SARS brutality and other things that happened this week

Despite our differences, we are all humans

The possibilities of Gender: Emeka Joseph Nwankwo, in conversation with Ayodele Olofintuade